I have to tell you all, the race yesterday was miserable and fabulous at the same time. Waking up earlier than a normal early race day was just as hard this year as last year. At least it wasn’t cold! I spent much of the drive muttering that I couldn’t believe I was doing this again. My friend that rallied us all to sign up wasn’t even going!

Once we got there, it wasn’t as cold or as dark as the year before and we knew what to expect so I wasn’t as nervous. I bounced around in my wave group. I started with a good run pace from the get go. I fell back to a cross country ski style walk just like my trainer had told me to do once it got hard and uphill. I picked up my knees.

When the downhill portions came, I picked up the pace and ran. I ran more than I ever have in my entire life! I picked a landmark to run to, and then found I could keep going past even though I didn’t think I could. I kept my trainer’s voice in my brain – keep your head up, move those arms. My own inner voice screamed – don’t land on your heels!

And I passed people. A lot of people. Some people leap frogged with me, but everyone I decided to beat – I beat.

My husband was at the finish, already done and surprised I was so early. I knew it was a good finish. I knew I had beat my best. That nice little endorphin high kicked in and I bounced around some more and tried to stretch out anything I needed to.

Even though it was early and dark to start, it was the best race I’ve had yet and I’m proudly looking at that medal right now. 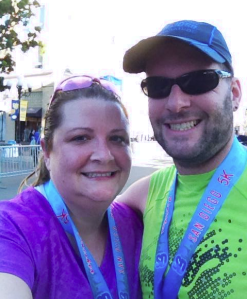 Hello out there. I’m still here! Things have gotten nutty in my world and I am not really able to go in to the specifics. But, I’m still fighting the good fight. At the beginning of November I did the Awesome 80s Run 5K again. Two groups of girls wouldn’t let me pass them. It made me mad! I beat one group through the finish, with Patrick doubling back to run the last 0.1 with me. 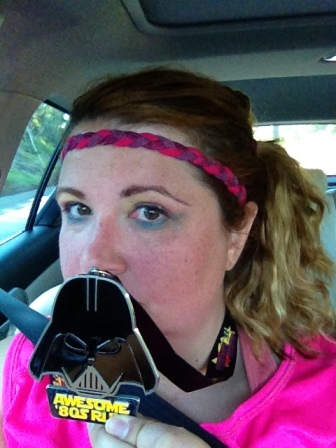 I kicked my gym training up. I was going to 2 circuit training classes a week and 2 TRX classes a week. I did a 60 day Beachbody Challenge. Things were great. Then, 2 of my trainers left my gym. Don’t worry, I’m following one to her next thing. And the other, well, as soon as I know what he’s up to – I’ll be back with him, too. I’ve also decided to completely double down on fitness and Beachbody by becoming a Coach.

I am faithfully drinking my Shakeology every day and I’ve seen some great improvements to my health! I’m so much more regular, my energy is up, and I’m not hungry between meals.

I promise, I’ll be back with more posts and craziness. I just wanted to fill you in on what’s up!

I stuck it out. It sucked sometimes. But I finished. I had a deal with myself, if I lost under 10 lb, I would integrate a lot of the Paleo practices in to my life and diet. If I lost more than 10, I would seriously commit to this at least 80% of the time.

I really don’t understand it! Things are fitting a bit better, but 14 lb lost isn’t what I thought it would be. I don’t care, I’ll take it. All. Day. Long.

How did I celebrate? I did a 5k! I also, had my first non Paleo meal afterwards and it sat in my stomach like a load of bricks and I got crazy gas burps.

The 5k was good – I didn’t run as much of it as I wanted, and I probably didn’t PR, but I beat people, and I got to run across the 50 yard line at Qualcomm stadium to see myself on the Jumbotron of the Chargers. Not a bad way to start a Sunday. And I got a new medal. 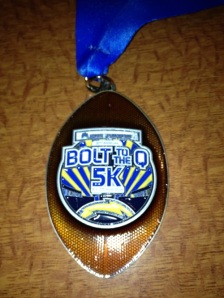 My posts folder is actually pretty clear that I have tried writing what I’ve been up to. I just haven’t been all that successful at publishing the posts. Maybe I haven’t finished my thoughts, maybe I was waiting on a photo. Either way, they never saw the little blue “publish” button hit, and that’s sad. Let’s take a moment to say sorry to the posts I abandoned.

So what HAVE I been up to? Well, the foot saga is ongoing. I’ve taken the new orthotics back to get further cushioned because I just couldn’t adjust to them. I also bought a pair of neutral running shoes. Those actually feel pretty wonderful. I’m at a loss of what the RIGHT answer is for my feet, but I’m just going to have to do what I think is best everyday and hope that it works out. I’m under no illusions. A lot of my issue is extra body weight. When that is lower, the feet will be happier, but it’s a Catch 22 in the meantime. 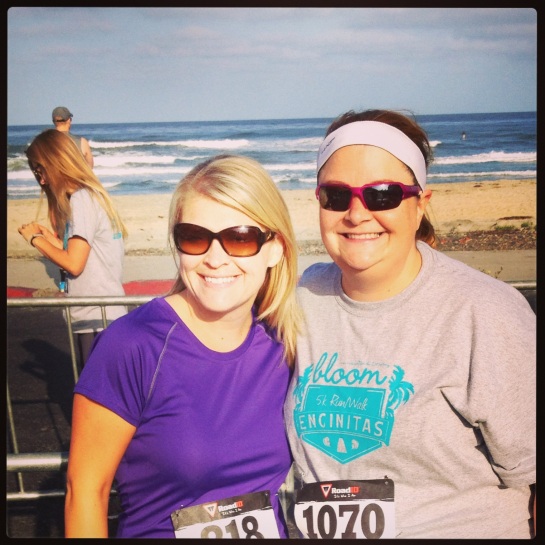 Me and my friend Michele at the Encinitas 5k

I’ve been doing 5k races. I did the Carlsbad 5000 in April and Encinitas 5k in May. I went home to Maine for a couple of weeks and did the Urban Runoff 5k with Portland friends. And I made new friends, as I tend to do. I have the Bolt to the Q upcoming. I’ve been focusing less on time and just on completion without injury. Funny enough, my times actually haven’t been that bad. I had signed up for the Rock n Roll San Diego Half Marathon this month, but I dropped out of the race. I didn’t get my mileage up with all my foot issues. I could have just walked it bloody, but I really didn’t want to ruin the rest of my week with hamburger feet. So, I supported my friends instead! And my partner in crime for this event got food poisoning the night before, so I would have been solo in my wave anyway.

My personal training regimen has been going well. My trainer is the gym’s fitness director and he’s been working on a group circuit training class, and I’ve been his guinea pig. So, there’s 3 trainers for the class and me. So far I’m the only student that has stuck. The good thing is, it’s all been free for a trial period! So basically I’ve been getting 2 -3 hours of personal training every week. It’s also been good to work with new people. They each push me in a different way and have their own style. I’ve had the chance to learn a lot and do things I didn’t know I could do before. 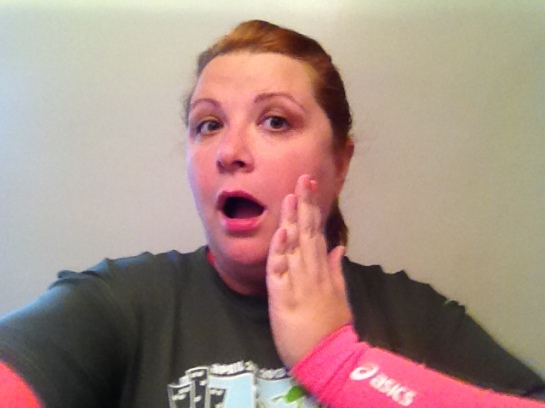 I’ve been surprised at the things I can do.

I also ATTENDED a triathlon. Make no mistake, I haven’t forgotten the reason for the blog. My husband did the duathlon and I went to support him. It was sobering. Even if I sign up for a super sprint, it’s still a big deal. This is still my goal, but I think that I have a lot further to go to get there than I thought.

Sunday was another 5K. This was the Cardiff Kook Run. The Cardiff Kook is a fun statue of a surfer that the locals mostly hate. I think he’s fun, but apparently he’s not in the correct stance or something and that ruffles the feathers of purists. Anyway, he’s a local icon and he gets decorated nightly in costumes.

I had done NOTHING for training. I got sick at the end of January. I think it was Flu B, but since I no longer work in medical diagnostics, I didn’t have tests kicking around with which to test myself. (But, I used to!) I was really ill for a week, but improving – so I didn’t bother seeing the doctor. For a week after that I’ve been better, but not 100%. I’m still coughing and I’m still REALLY tired. I gave it a good try though!

I wore my new running shoes. I did see a podiatrist about new custom insoles, but they aren’t ready yet. I wore the new socks I picked up as well. And, I got new blisters. Again, the balls of both feet, and this time it was the left side that popped in the middle of things. It didn’t hurt as bad as last time. I knew that I should have prepared better and picked up some double layered socks.

The good news is, it was a fun race. I passed a lot of people, and not that many passed me. I was impressed at how well controlled I was running down hill. My husband was my pacing coach, since he has the fancy Garmin. Readers, I love my husband, but if I could have hit him during the race, I just might have. His method of motivation was to annoy the crap out of me. 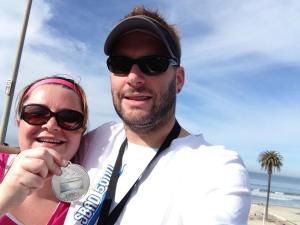 I love a 5k with finisher’s bling. Even if I hold it backward for the photo op.

I hit a PR, but I didn’t meet the goal I had set. Still, for no preparation and new blisters? Not that bad!

Oh, and that very day I DID pick up those double layered socks. And I wore them today. And they are magical.

I completed the Resolution Run 5K this weekend, despite being totally unprepared. Seriously, the night before I was drinking a margarita, munching on tortilla chips saying “Oh crap! 5K tomorrow! I have to be up at 5 to eat!”

I kept thinking this was a terrible idea that morning while getting ready, and stepping outside the house to rain only made me regret it even more. But we parked just before the sun came up and miraculously it stopped raining. I set up my iPod and got ready to rock it. 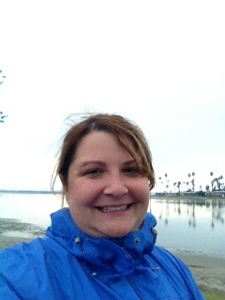 My pace was good, I bunny hopped around slow people and chose a guy to chase. Around mile 1 I could tell my feet were sliding around too much and I felt the start of a blister on the right ball of my foot. By the half way turn around I was starting to lose my quarry because my pace was slipping from the blister forming. At mile 2 I noticed the left foot felt like it was also blistering. I passed mile 3 and the right blister popped. I passed a couple I couldn’t quite get ahead of, finally and pushed through the finish.

Happily, I got a Finisher’s medal! Unhappily, I limped my way back to the car to wait for my husband to finish the 15K. I checked my sock and it was wet with blood and whatever else blisters are made of. My time wasn’t a PR , but considering I was pretty unhappy with my feet, I’ll take it.

I hobbled around the rest of the day, woke up shortly after falling asleep with my feet in fiery pain that kept me up. But it passed, I’m better, and I bought new shoes today. Also, I’m seeing a new podiatrist for insoles next week. 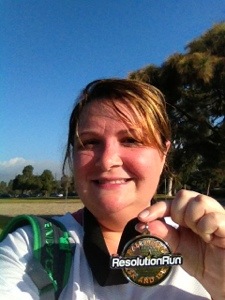