Continuing on my journey to write about my fitness past to have a better fitness future.

Oh college.  I loved college.  I was a serious kid who got to college and became an immature adult.  I didn’t gain the Freshman 15.  I lost about 30 lb.  How?  Being pretty stressed about the transition and having to eat at the dining commons.  Ugh.

This is Fall of Freshman year. I cut out the guy I used to play tennis with. I’m bending at the waist very oddly.

However, the weight loss stopped and reversed itself quickly when I started underage drinking.  Fitness in college was sporadic.  I did like to dance at parties and later the one dance club in the area.  My former roommate got me to go to the university’s gym with her a few times for some weight lifting.  I played intramural mixed doubles tennis with a guy I wanted to date.  We actually did really well and it was nice to be able to show off what I could do on the court. 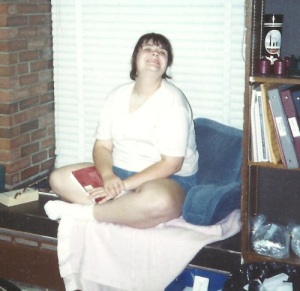 Sophomore year, my job in a call center definitely wasn’t enough activity over the summer.

Although this blog and these posts are about fitness, it wouldn’t be right to not address the stuff that was going on in my head.  I continued to struggle on and off with depression.  Fitness was part of the cure, but getting out there and starting was the hard part.  I kept working in the spring and summer at my mom’s greenhouse off and on.  I even took an additional summer job in conservation biology because the field component would be physical. It wasn’t enough.  But my emotional issues were big.  To compensate, I ate out a lot, drank, and paid for eating out and drinking with my credit card.  I was circling downward.

Junior Year. I always say I look better front on that from the side, but here’s the side view.

Before my senior year, I began the most significant relationship with a guy that I had up until that point.  It was wonderful for me, and terrible at the same time.  He appreciated my body and for the first time that I can remember, from his influence, I gave up a little of the loathing that I let seethe within me about how I looked.  Unfortunately I hung too much of my own perceived worth on to what he thought of me.  The relationship was not going to end up in the direction I wanted it to.  I was looking for things he either couldn’t or didn’t want to give.  But, I hung on, despite the fact that I knew all this down deep.  I held out hope that things would change, and if I was better, if I was prettier, if I was thinner, I would get the happy ending I wanted.  I didn’t.  Things between us went from combustible to nuclear, and I was alone, left feeling like I wasn’t good enough.  I obviously wasn’t good enough for him.  I wasn’t pretty enough, I was too fat, and everything about me was just wrong.  And it was all my fault.  If I could be different, I could be happy.  These thoughts were just too much to deal with.

Not surprisingly, I ended that year at my heaviest.  My self hatred was deep, and I took it out on myself in so many unhealthy ways.  While I never feel that I had bulimia, I did force myself to vomit.  Somehow I felt better by purging.  In general, I was taking my self loathing to as much of a physical materialization as I could stand.  I know it could have been much worse, but it was bad enough for me.

Senior Year, right before graduation. I told you I had a drinking problem. Why was I drinking such crap?

After graduation I started working with my mom by day, and then spending my evenings being a professional drinker.  And I mean, every evening.  It was really ridiculous.  It is not good to be that much of a regular at a bar that the staff and other patrons save you bar stools.  (Some good came from this – my friend and drinking companion met her husband from our season as floozies. And they have 2 awesome boys that I am a proud Auntie to.)

Sometime in the late summer, another friend and I decided to get serious about fitness.  We joined a gym and got a trainer to show us around.  We held each other accountable, and we tried everything we could.  Weight training, spin class, lap swimming, cardio, we signed up.  Amazingly, we were even able to go separately.  The gym had a cool little community.  If I went alone during the morning, I’d sit on a stationary bike near some older men who watched the stock market on the television and tried to teach me about finance.  They front desk workers knew us and made sure that they told us they were glad we were there every time.  Still, I had some rough spots. I managed to fall off a stationary bike once (the seat pin wasn’t in all the way) get a death glare from another patron, but I still worked out beside him anyway.  Too much strain weight lifting sent me to the ER once.  In essence I made the equivalent of cracking my knuckles, but in my cervical vertebrae.

I fell in love.  With Step Class.  I made a good friend in the instructor and went to her class faithfully.  Step just was something I embraced entirely.  I came home feeling exhausted and accomplished.  By Fall I was really on my way.  I saw numbers sliding off the scale, and I saw changes in my self.  I got a new trainer, who was really frenetic, and someone convinced me that a 3 hour cardio and weight training session was a good idea.  As December approached, I was feeling awesome.  My workouts were on point, I was a devotee of the Zone diet, and I was fearless.  I booked a trip to San Francisco to job hunt.

The job hunt didn’t work out as well as I had hoped, but I did have a full-time job offer wait for me when I got home.  I struggled on whether or not to take it because I knew it would probably lead me back in to my depression and  bad habits.  I accepted the position.  It was 1 and 1/2 hours from home, at a world renowned lab that happened to be on a island that was a tourist destination.  I moved at the start of Winter when nearly the whole town was boarded up closed.  For a girl who thrived on being in the middle of things, this was not the best choice in starting my career.

I joined a gym that was off-island.  It was a 30 min drive to get there.  But I made a great effort to do it.  I tried embracing island life.  I trained, I took classes, and in the summer, I hiked.  I’m not the most outdoorsy person, so this was a pretty big deal.  The job, the island, were just not a good fit for me.  After nearly one year, I was back at home, back to my old gym, trying to get back to the fit,  fearless girl I had been the year before. 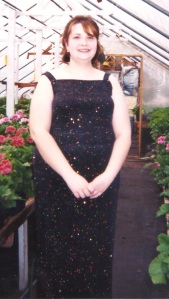 Another post-college shot. I went to a formal as an alum, but was in the smallest size dress I have ever worn as an adult.

A friend and I moved on to the largest city in our state. My career was not skyrocketing, in fact I was long term temping, but I joined a gym there. I made a couple of new friends to go to the gym with. My eating patterns were much better since I live with my good friend and didn’t always have to cook and eat alone.