One of my biggest pet peeves are the “bag ladies” and “duffel men” of the gym. My gym provides day lockers at no charge. You just use your membership card, and pull out the key on a convenient little bracelet. Forget your membership card? No problem, they’ll give you one at the front desk. Also, the gym clearly outlines that you shouldn’t bring your gym bags around with you when you work out.

But who follows rules these days anyway? Certainly not the lady planning her baby shower on her cell phone on the treadmill. (No cell phones inside – another ignore rule.) 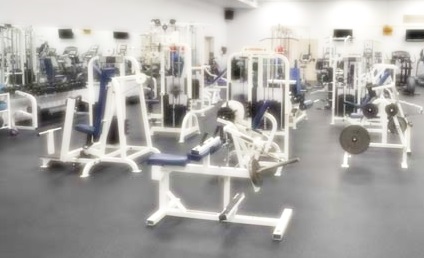 I love a clean gym floor.

Men for the most part are the least offensive of this rule. They have their little bags and they pretty much move it around with them when work. On the other hand, women are capital offenders. It’s not enough to have a bag. She’s got to have a towel, a water bottle, or more, and she pretty much spreads her stuff out to mark her territory. You want a piece of this mirror? Nope. You need to come over and grab some dumbbells? Can’t you see I’m HERE being very important. And if you do tread in to her area, be prepared for the stink eye. Be prepared for her to move each item over, away from you, laboriously.

There’s another lady, in particular, who is of the same breed but spends her time up on the cardio deck. Let’s call her Cracked Out Princess Leia. I call her this because she always wears her hair in 2 pigtails on the side of her head, half pulled through. So, totally lazy ass buns. She’s an older lady, but of indeterminable age. You know the kind? She could be pathetically in her 30’s or be fantastic in her 50’s, but you just can’t quite tell. The face says one thing, the neck another, they body something else.

Anyway, COPL is a bag lady. She comes up to the cardio deck with her beach bag of stuff. Maybe it’s just a really big ass purse. COPL removes her hat (most of the time, it’s a winter knit hat) and various scarves before taking to the elliptical. She also usually wears a bulky coat upstairs, too. By the way, I live in California, and although we are big weather wimps, she has done this on a 90 degree day and our gym has no A/C.

How the person next to her does not have their machine caught up in all her accoutrements is beyond me. She obviously does feel some warmth during her workout because her shirt usually gets pulled up and tied above her waist like she’s at cheerleading camp.

I’m a total square and a rule abider. If I bring anything in, it goes in the day lockers. Mostly, I put my purse under the seat in the car and lock it all up. When I have my convertible, I can’t really do that. I feel guilty toting my water bottle around and leaving it at a station I’m not at during a circuit round. And yes, I do feel guilty snarking about COPL, but she’s pretty ridiculous. If it weren’t against gym rules, I’d take a picture.

I admit that I still keep my eyes down at the gym. I’ve been going to this gym for a year and certainly know the ropes, but I slink around and hope to not be noticed. My gym is awesome. I love the staff. The facility is beautiful. There is a lot to choose from. It’s concierge level. I’m also kind of a VIP. Most of the staff knows me. The other day I got waved through, with a guest, without having to go through hoops. But, my gym is also a place for pretty people, Olympians, trophy wives, serious athletes. There aren’t a whole lot of people like me.

Maybe I look like a gym beginner, but I’m not. Despite what it might look like from the outside perspective, I’m a work in progress. I don’t need to advertise any of this, so I just keep my head down, do my thing, give everyone their space and hope no one notices me.

Most of the time they don’t notice me. If they do, it falls in to a couple of categories. 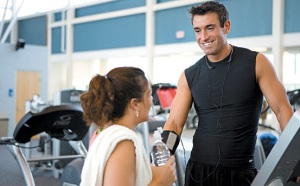 Some days you just don’t want to talk to anyone.

Category: HELPFUL CREEPY GUY. You’ve probably seen this guy. He approaches new women and offers his help. Maybe he tells you when he works out and offers to be your gym buddy. Maybe he gives you immediate advice. But he takes a little too much interest in you.

Category: YOUR FAT IS CONTAGIOUS. This can be male or female. If you work out too near them, they move. They give you a dirty look before they do. I met this guy at my first gym. I called his Mr. America and he was bad ass. He was also beside me on the day I fell off the stationary bike (true story). He didn’t move immediately, but any other time he saw me, he made sure to stay away.

Category: THE MOTIVATOR. This person tries to show you that, hey, they’ve noticed you. Good job. Not that they’ve seen you do anything. I actually had someone stop and tell me “I’m glad to see you here.” Uh, thanks, it’s good to see you, too? I realize that this is positive, but it feels like I’ve attracted unnecessary attention for nothing at all.

Last week, I had a new, different sort of encounter. I was doing my upper body circuit, trying to navigate the busy weight area. And I got an honest compliment about something I was doing. A lady, who later told me she was a Barre instructor, told me that I had perfect form in my push up. That was pretty cool. It was praise I felt like I earned. Of course it also made me paranoid when I did my next set, in case my form wasn’t as good!

Negative comments impact me harder than positive ones lift me up. This is something I have to work on. In a perfect situation, those would be inverse. In general, I’m trying to be more gracious about compliments. I was raised to beware of pride and vanity. Add that to my other issues, it can be a mine field. I smile and thank people, resisting the urge to point out the negativity, even if it exists in my head.

I’m continuing to layout the story of my life, as it pertains to fitness, body issues and happiness.  It’s really helping me process what went on.  You guys out there are actually reading this, which is awesome!  If you know me, I hope you get a kick out of all the old photos.

In my early 20’s, I had graduated college, gotten fit, acquired and left my first big job, and then, shortly after Y2K (remember that whole mess?) moved with my good friend to my state’s largest city to pursue my dreams of becoming a professional floozy.  No, not really.  We moved to the Big City because we wanted more than what our Small City had to offer.

Looking back on this time, I was actually doing pretty okay.  I got a membership at a local gym and had a couple of gym buddies.  We’d hold each other accountable.  As for training, I was pretty much going on my own.  The free personal training they offered was a JOKE, but I knew enough to be dangerous by this point.  Working out was a big part of my social life.  I made casual friends there, spent time talking out the day’s problems with my girlfriends on the elliptical.  I even dated a guy who went to the same gym, we’d have dates there, trying to beat each other on the treadmill.  The evening on September 11 when the world was going to hell?  I was on the cardio deck, watching the closed captioned news.

Yes, these photos are from house parties. But, they really show how happy I was. On one side was a former mortal enemy, on the other, a dear friend from when I was a teen.

My love of Step Aerobics was hit hard though when I took classes there.  I could keep up with classes at the other gyms I had been to, multiple instructors, but at this place, the choreography was too much.  I ended up finding a new group fitness passion.  Yoga!  I took a class at a school that tended toward the Hatha/Iyengar style and it fit me perfectly.  When I practiced yoga I felt amazing.  I was happier, more peaceful, and I called a truce with the war on my body without realizing it.  Plus, one day I went to shave my legs in the shower and felt my calves.  OMG.  Ripped!  Yoga taught me how to breathe my way out of anxiety, which came in handy for my 45 min commute on a neglected stretch of highway in a snow storm.

Professionally, I went from SUPER temp, to landing pretty much my dream job as a scientist, to being a graduate student.  I had a great group of friends.  A core part of my college group was in the Big City with me, I could count on many others to pass through a couple times a year to catch up, and I made a lot of new friends.  We walked the 3 and a half mile loop near where I lived, hiked, and we DANCED.  I was out dancing nearly every weekend.  Drinking was usually included, but everything was more controlled than it had been.  One of my favorite memories was getting ready at my place with my pack of girlfriends, parking the car in the garage across from the bar district, taking off our coats and mittens, running as fast as possible into the bars wearing little thin shirts, and boots with insane heels.

My diet was fairly decent.  When we started out, my roommate and I were the original 2 Broke Girls.  We’d frequent restaurants with “college night” specials, even if when we were out of school.  Good thing our IDs didn’t expire.  We cooked a lot at home.  I don’t think I ever drank soda, and if I ate dessert, it was usually an insanely special occasion.  We just couldn’t afford it.  I got used to cooking for 1 more often, and I learned to like eating lots of fish.  I frequented the public market for produce and even if I wasn’t “by the book” I was still more or less on “The Zone.”  I even stopped drinking entirely from Jan 1 2000-May 5 2000.  Cinco de Mayo broke my will.

OMG, this is proof I used to have a waist. We wore leis because every February I’d throw a tropical themed party to distract us from how freaking cold and miserable we were.

As for my mood?  There were ups and downs.  The breakup from my treadmill opponent boyfriend hit me pretty hard, but I threw myself in to my social life to make up for it, and started seeing a professional to work through it the right way.

Looking back, maybe I wasn’t in as ass kicking shape as I was after college, but I was in a smaller size.  Fitness and friends were the biggest part of my life.  I was professionally happy and didn’t really care about adding anything else to the equation.  And do you know what happened then?

I met my future husband.