I was supposed to run the Rock ‘N’ Roll Half Marathon in Vegas today (well, at time of writing it was yesterday).  I didn’t run.  I didn’t even walk.  Despite being very undertrained – I’ve been putting in sporadic treadmill sessions – and having plantar fasciitis and general ankle aching, I was going to woman up and do 13.1.

Thanks to Patrick for carrying Kurt’s remembrance bib.

There were 2 things that put me over the edge to wanting to do this anyway, aside from just being a badass chick.  The first is, this run benefits the Crohn’s and Colitis Foundation and my dear friend Kurt passed away from Crohn’s related complications.  Crohn’s also impacts several friends, sorority sisters, and children of friends.  So I wanted to do it for them.

The second reason I wanted to run anyway is last year I made a friend in my corral for the 10K.  Lynnette and I had a lot of fun, even when we got sort of lost and had to double back to actually finish the 10K.  We had made plans to do the half together and I didn’t want to let her down.  She’s super cool and I was looking forward to spending time with her again.

So what pushed me over the edge?  Over the last 2 days I walked around Las Vegas in supportive shoes and recover flip flops, yet – by yesterday afternoon I was getting some knee pain.  Overall I did early 20 miles in those 2 days, which is quite a bit more than I expected.  The knee pain got worse overnight.  I got a brace, started icing, elevated it, rested it, but close to race time, I was still in a lot of pain and hobbling.  If it had been a 5K, I probably would have sucked it up.  But with 4 times that distance, I decided that this would have to be a race I’d sit out.

So I DNFed this one.  Heck, I didn’t even start.  I got some great advice in the Expo for my plantar fasciitis.  Once I’m back home I’m full throttle on getting that healed because it’s really impacting my training negatively.  In general, taking care of my soft tissue needs to be a priority because, hey, I’m not getting any younger.  Knee, feet, ankles, they are all going to be well taken care of.

And June will be here before I know it.  This may not have been my first half marathon – but maybe it’s because I had more things to learn.  Listening to my body is important.  If I’m going to keep improving the world one cup of coffee at a time, I’m going to have to stand.  Busted knees aren’t good with that.

I have a feeling Kurt would have thought I was insane for wanting to do a half marathon.  But, it was important to me that the remembrance bib be worn, so Patrick wore it for me.  I hope I get to come back some other time and do this race right.

Tomorrow I’m doing the Rock n Roll San Diego Half Marathon Relay with my dude.  I’m all in.  But I’d be lying if I told you I was prepared.  I am not. 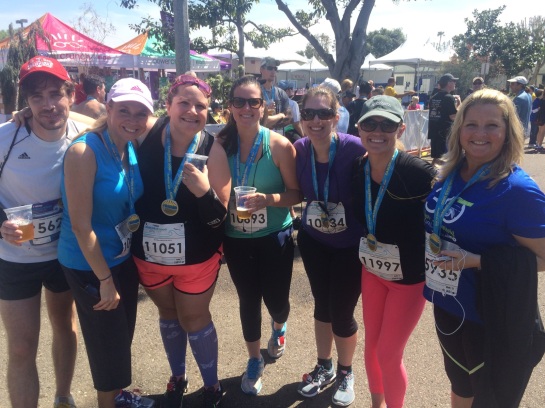 When I started this blog I was trying to develop a love affair with running.  I don’t necessarily think that happened.  I acknowledge that running is helpful for building cardio endurance, and in general, it’s probably a good life skill.  Eventually we are all running from or to something!  Races became a way to make sure I got a decent workout and to be able to track my progress.  It was fun, it was something I could do with friends, or my dude – and sometimes I did it all alone.

The 5K distance is easy, I did a 10K in December with little trouble.  I should be fine, right?  I’m not so sure.  I’ve scaled down workouts and ramped up nutrition lately.  I’ve been putting just 4 hours a week in.  That’s a BIG change from where I was in November.  But, I generally feel pretty good.  I hope that I am just psyching myself out on this.

However, I am leaner than I ever have been.  I have a pretty physically demanding job now that I’ve adapted very well to.  I can go hard for 2 or more hours.  I’m only in for 6 miles.  I can *do* this.

This race is going to be probably only one of 3 I do this year.  That’s a big change from one a month that I tried to do a few years ago.  I have less t-shirts and medals to show for it, but I concentrate more on the performance.  I’m going to bed early, I’ve been avoiding dairy.  I’m trying to hydrate.  My infection still hasn’t cleared 100% and the antibiotics are going to make sunscreen really important.

So here I go (tomorrow).  I’ll see you on the other side of the finish.