You can only get a good workout at a gym.

Home is supposed to be relaxing.

Unless you have a team of professionals monitoring you, you’ll never get fit.

No one ever got a good workout on their own.

You don’t have a DVD player anymore anyway.

There’s no way you can actually stop watching Netflix long enough to throw in a workout.

You have no equipment to do any of those fancy moves.

There’s no way you can sweat without someone yelling at you.

Your pet/spouse/child won’t leave you alone long enough to have time to yourself to work out.

Does any of this sound familiar? It should.  We are continually sabotaging ourselves from any of the healthy choices we need to make by the voices we listen to.  Sometimes they are in our head, from experiences we’ve had.  And sometimes they are from people in our lives.  They can even be from society and culture in general!  It can get pretty overwhelming and I have to admit that I’ve listened to them, too.

I have done lots of things in my fitness life.  I’ve been a member of gyms.  I’ve been gone regularly!  I’ve taken classes in a devotional fashion.  I’ve run on the streets, in traffic, where everyone can see me.  I’ve worked with personal trainers.  I’ve been in small group circuit training classes.  I’ve met up with friends to do fit stuff out in the world.  I’ve even run a fitness class outside of my house!

But I ALSO workout at home.

Getting PUMPED up at home.

I used to think that the act of getting dressed and getting in the car was what I needed to make sure I didn’t drop out of my workout routine.  I admit, I’ve never turned around on my way to a gym. I also get dressed and head downstairs, fire up my Apple TV and drink my pre workout Energize.  That’s my NEW ritual to get going.  I’ve bagged gym workouts when I pushed too hard.  I’ve surrendered during home workouts when I haven’t had it in me.

The thing I had to change was my mindset.  I had to question the truth of all of those 10 statements.  The funny thing is, there’s a little truth in them, but there’s also a whole lot of excuses and fear.

The at-home thing works for me now.  I get to pick from a bunch of programs.  I’m close to my own shower, which I know doesn’t have plantar warts growing in it.  I can even access them when I’m traveling. (Like the time I did the line dancing workout in a tiny hotel room.)  But I can ALSO go swim some laps, go for a run, go the the gym and lift some weights.

I can do anything I want, and that’s totally okay.  But I DO stuff.  It’s often easier to START at home.  The gym is scary.  People driving by you when you are trying to run on the street, that’s intimidating.  If I need the people portion, I can workout with a friend at home or find the friends on Facebook who are also doing the same thing as I am.  That way, I have a gym buddy, anytime, anyplace, anywhere.

So forget what you think about working out at home.  It’s as awesome as you want to make it.  And it’s pretty great when you let it.

Yes, it is Wednesday, not Monday. But I want to make sure I blog more, so I’m going to jump in! I’ve been off Paleo, and I think I see more of what it offered me off it than I did when I was on. I never felt that different as I was on it, but I think any changes were too gradual. Being off it has been different. I haven’t gotten back on the horse completely, but I’m getting there.

If you’ve taken part in FMM then you know the rules. If you’re new, please take a moment to answer this week’s question on your own blog then add your link in the comments section here at: http://www.alltheweigh.com so we can all see your FMM questions and answers. Please invite your blog readers to add their links here too so everyone has to opportunity to be seen. The idea is to connect with other awesome bloggers so take a moment to post your own FMM post and comment on a couple of other posts. Now it’s time for this week’s topic!

Ten Things That Make Me Happy

1. Tiffany & Co. I love Tiffany blue so much I painted my bedroom that color. I love Tiffany jewelry. My husband bought my engagement ring there because I told him how the diamonds sparkled differently. Sure, it’s expensive, but not only are the styles timeless, they are just a little bit quirky. Enough to make them awesomely original. Every time I go to a new Tiffany store, I go get my rings cleaned. And they are really nice to me, even though my rings aren’t giant by any means.

2. My cat, Tess. She’s the best. She’s my constant companion. She’s a mini me. She’s a diva. She’s trouble. She’s my daughter. I can’t even begin to tell you how much she means to me.

3. Alpha Phi. I’m not only a proud member, I’m happy to be serving at San Diego’s Alumnae Chapter President. This organization has given me so much as a college student and as an alum. 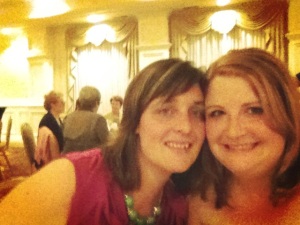 My Alpha Phi sister Jen and I this year at our chapter’s 50th anniversary celebration.

4. Lifting heavy weight. I get a special kick out of really killing the heavy lifting days. I’m not fast, I’m not coordinated, I’m not graceful, but I’m really, really strong.

5. Tennis. I’m so happy on the court. I have no idea why I don’t play more often.

Hanging out our lake house this year.

7. The ocean. I’ve always loved it. It never fails to calm me down when I’m anxious. I don’t think I could ever live far away from it again.

8. Music. I’m not talented at all when it comes to music, but I love to listen to it, and I love that it makes me feel things.

9. Friends. I’m lucky to have great people in my life. I thought my college friends were the best, and they are. I learned how to keep surrounding myself with the best people. My San Diego friends are my urban family. 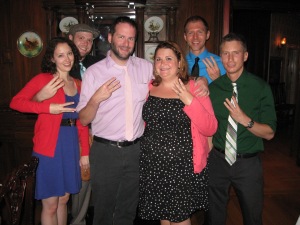 10. Last but not least, my husband! We’re currently living in a commuting situation at 2 different parts of the state, but we’re making it work. He’s my best friend, my partner in crime, the person I trust the most in the world, the guy that drives me crazy in every possible way. Going on 12 years together, it has yet to nearly get boring.

This is after our bachelor/bachelorette parties in Las Vegas. We met back up and I harassed him just a little bit.